Martham is blessed with a long historical background.

Until recently it was claimed the village originated from Saxon times and undoubtably its name derives from that period, but archeological surveys and more recent finds prove that the area has seen the presence of man here for many millennia. Some local prehistoric finds show that man hunted and gathered in the region long before Martham, or even East Anglia, existed at a time when what is now England was physically connected to Europe. Finds have been made locally representing every period through Mesolithic, Neolithic, Bronze, Iron, Roman, Anglo Saxon and Medieval periods. The pages that are listed here in the menu under “Ancient History” take you on a tour of these periods and have many illustrations.

The village is exceptionally lucky to have special records like the Domesday records of 1086 that show it had an unusually large number of freemen in comparison with the rest of England; an account of the Anglo-Danish Village of Martham in 1101 by Rev. William Hudson; the Stowe Survey of 1292 and Manorial Rolls from 1272 to the middle of the 14th century.

In addition, some notable books have been written like ‘Medieval Flegg’ by Barbara Cornford*; ‘The Strangers Guidebook for the Polite Village of Martham’ by Robert Porter;  ‘Martham in Times Past’ by Christine Orton and ‘Glimpses into the History of the Village of Martham’ by Ann Meakin. Local historians have also greatly contributed to our community history by producing a variety of papers and I have shamelessly drawn on all these sources, and others, to try to bring the strands of the history of our village together in one place.

Now go to the menu or take a short cut to historical periods here: 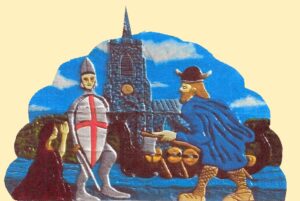