In 1086, the Domesday Book recorded that Martham had 36 freemen who owned 610 acres of land and 16 ploughs. In addition there were peasant families who made the population up to around 400 people. There was a church with 50 acres of land provided by the freemen who gave money for it to be built.

The Domesday Book also has a curious reference to 27 ‘socmen’ living in Hemsby but owning about 200 acres of land in Martham as well as 30 acres in Hemsby. (A socman is a man who paid rent or gave other non-military service to a landlord for land). The ‘socmen’ appear to be part of the Danish settlers working in Martham. The land they worked had once been owned by the Earl of Mercia but at Domesday had passed into the hands of Bishop Herbert. Within 15 years of the Domesday survey Bishop Herbert united his Hemsby and Martham lands to form his Martham Manor.
In 1292, The Stowe survey was carried out which provides detailed information about people holding land in Martham. By this time the original parcels of allocated land in the three field system had become over 2,000 strips divided amongst over eight times the original number of owners. By 1300, the population had increased to 1,000 making it a very large village. Martham Manor was owned by that time by the Cathedral Prior of Norwich.
The 1300’s brought a series of disasters to the community. A change in climate led to flooding. The peat diggings filled with water producing the Broads as we know them today. There was a succession of bad harvests. In 1348/49, the Black Death plague struck the village reducing the population by a third or more.
By the end of the 1500’s, the village had recovered. The Broads provided reeds for thatching roofs and peat for fuel as well as fish and wildfowl for food. Most families kept a pig and cow on common land to provide butter and cheese. The richer farmers kept flocks of sheep profiting from the growing wool trade.

Martham has a wealth of medieval history so it is not surprising that many artefacts have been found that represent the period. The magnificent 15th century ecclesiastical gold ring shown above was, perhaps appropriately, found at Church Farm. It illustrates the baby Christ on the shoulder of the Virgin Mary.

Graffiti isn’t just a modern curse, our forebears indulged in it as well and lucky for us there is an example from medieval times in St Mary’s Church. Scratched on one of the pillars there is a drawing of a ‘cog’ which was an oak sailing vessel very common in northern Europe during the Middle Ages.  They were used by the Hanseatic League and replicas can be seen in Sweden at Malmo. Cogs were plank built, had one mast and a square-rigged single sail hanging from a yard arm. When you look closely you can see that it is beautifully drawn by an artist with a very good knowledge of sailing ships and how they work. There is lime-wash in the scratched outline and it therefore dates from before the Reformation in the 16th century when much that was decorative was obliterated with lime wash. The lime-wash either wore off or was removed in a later century.

But why is it there?  Before the days of road, rail and air transport everything was transported by water and even the narrowest rivers that were navigable were used by small boats. Sea-going transport was vital and almost every place near the sea had its harbour, jetty or staithe. But seafarers had a very risky job. They were in constant danger from the weather, the tides, the hidden sandbanks and rocks and even pirates and warfare. Seafaring took men away from their homes for months, sometimes years on end and they needed to know that people remembered them and prayed for them.

Nowadays we think constantly of those near and dear to us and have photos and other mementoes to remind us to think of them and to pray for them.  Many centuries ago, they did not have these things.  Being out of sight meant that sailors could be out of mind too, but they desperately needed to feel that they were not forgotten. The symbol of a ship on a church pillar would remind people to pray for and remember before God those of their community who were seafarers.  Sometimes a wealthy merchant ship-owner would have commissioned a skilled artist to make an engraving of his ship.

At places like Blakeney, Wiveton and Cley, which were important ports in the Middle Ages, you can see several ships scratched on pillars in the churches, but there are few that are as large or finely crafted as ours at Martham.

*With thanks to local historian Ann Meakin for providing this information.

The medieval objects photographed here were found by the author unless otherwise marked. Hover your mouse over any photograph for a description of it. Click on any photo to zoom in and then you can scroll through as many as you like. 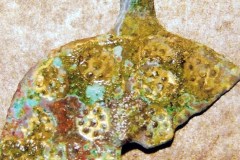 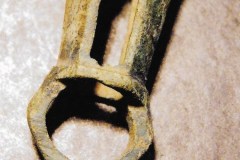 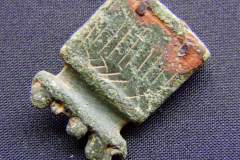 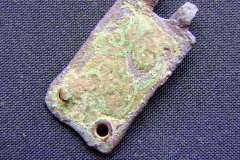 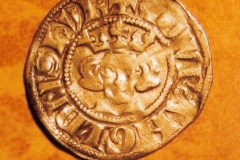 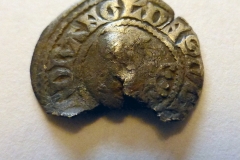 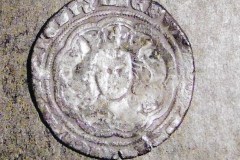 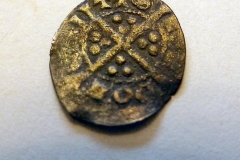 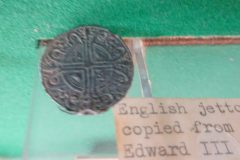 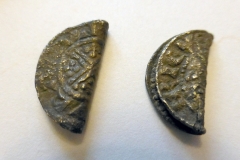 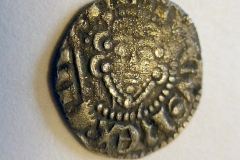 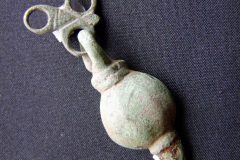 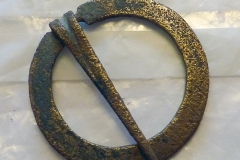 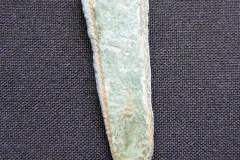 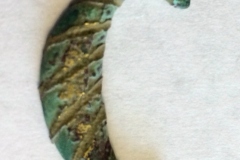 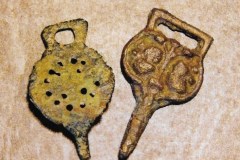 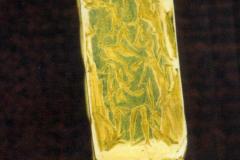 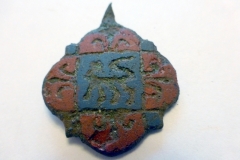 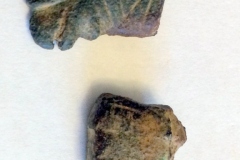 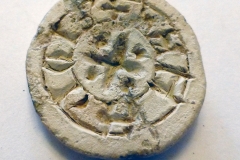 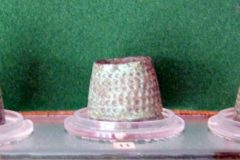 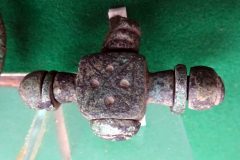 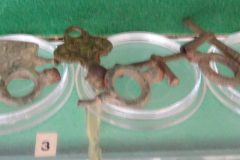 Cobham Manor in Martham was said to be in the area of what is now the fishing pits to the east of the Boat Dyke Staithe at the north end of Ferrygate next to the River Thurne. In around 1362 the land, or manor, came into the ownership of Sir Laurence De Burley who gave it, no doubt for the redemption of his sole, to the College of Cobham in Kent. The monks of the College found it rather inconvenient to administer a small estate 150 miles away from Kent so in 1380 they came to an agreement with the Prior of Norwich to exchange the Manor in exchange for Chalke Church in Gravesend, Kent which the Prior owned. Thus Moregrove and Cobham Manor came into the ownership of the Prior of Norwich. Cobham Manor had a good asset which was a fishery on the River Thurne situated near to where the present day Martham Boatbuilding & Development Company has a yard at the north end of Cess Road.

Other oddments relating to this period are as follows:-

Around the end time of Edward the Confessor (1046-1066) a freeman ploughed the manor with two oxen and the land was valued at 8d and was not under any particular servitude to a lord. In 1066 William the Conqueror took ownership of 10 acres which were occupied by a freeman of Earl Guert, and Almarus had the care of it.

In 1235, during the reign of Henry III, Bartholomew de Burlee, or Bretyle held half the ownership of Cobham Manor and paid a contribution to the Prior when the King’s sister married.

In 1312, during the reign of Edward II,  Isabel, the widow of Bartholomew de Burlee, gave up all rights to the services of the Prior’s villeins, which were previously held by her ancestors, as witnessed by Alexander de Clavering, Bartholomew de Somerton, Knights.

In 1357, during the reign of Edward III, Henry de Apuldrefeld (senior), William de Apudrefeld, Isenry de Apuldrefeld (junior), and John King, (chaplains), granted by deed to Reginald de Cobham (clerk), John Adeleigh (junior), John Tasborow (clerk) the manor of Martham in Norfolk with all the lands they had be given by Sir  Laurence de Burley of Kent.

In 1362, during the reign Edward III, Ralph, son of Sir Edward Gerberge, released to Sir Laurence Burlee or Brevyle, and his heirs, all his right in the lesser part of his interests in the manors of Martham and Gillingham, with lands in Hemsby and Ormesby. Sir Laurence de Burley gave it soon after that to the college at Cobham, in Kent, founded by John de Cobham under a license granted by Edward III.

In 1372, during the reign of Edward III, Henry, Bishop of Norwich authorised Reginald de Cobham (his clerk) to give this lordship to the Master and Priests of that college in Norwich. In the same year, on 20th December the Master and Fellows leased it to John Lord Cobham for life.

In 1381, during the reign of Richard II, the master of Cobham College agreed to pay for the manor and lands by instalments to the Priory of Norwich at the rate of  £16 per annum and it remained in the same ownership until the Dissolution (between 1536 and 1541) when it was taken by the Crown.

In 1586, during the reign of Queen Elizabeth I, George Brook, gent, became the leasehold of Cobham Manor with all the demean lands for 21 years at £4 16s. 4d. per annum.

In the early 16th century the Cobham Estate was granted to William Knightly, as the Manor of Moregrove and Knightly.

On 17th October 1603  a grant of the Cobham Manor (paying the same rent as in 1586) was made to Sir George Hume and in 1609 Sir Christopher Hatton leased the Manor to Sir William Isobart.

The following information was taken from “An Essay Towards a Topographical History of the County of Norfolk  by Francis Blomefield” which was originally published in 1805.

Back to Ancient History