Sutfield House stands on the west side of White Street.  Unlike many other houses in Martham it was associated for many years with one family – the Risings.  The family were linked with the house for so long that it is sometimes difficult not to write more about them than the building. The house is the earliest surviving, truly purpose built, Georgian home in Martham. As we shall see it was almost certainly built by Robert Rising (1801-1885) or his nephew Thomas Sutfield Rising (1774-1855).

The first slight mystery is why it was ever called Sutfield House. The most compelling reason is that one, or more, of the Risings married into the Sutfield family and were held in such high esteem that the house was named after the maternal side of the family. Or, perhaps a girl from the Sutfield side came with sufficient dowry to pay for the dwelling. Sadly, there is no proof of either.  A long genealogical search through the Rising’s family tree does reveal a marriage between Elizabeth Rising and Peter Sutfield at St Mary the Virgin on 25th November 1641.  The Risings were a land owning and farming family mainly from Horsey and West Somerton but the odd thing is that during the period 1575 to 1680 there was only the one single event, that of Elizabeth’s marriage, concerning a Rising in Martham whereas the name Sutfield (or variations) crop up 28 times in baptisms; 8 times in marriages and 21 times in burials at St Mary the Virgin. During this period, it seems the Sutfields were well established as farmers and land owners in Martham and yet not a single gravestone or exact grave position for any one of them can be indentified in the graveyard today.  Conversely as the church records stop recording anything for the Sutfields, the Risings come to prominence all over Flegg including, Horsey, Somerton, Caister and Martham. Robert Rising (1768 to 1841) of West Somerton purchased the Horsey Estate from the Brograve family in 1803. His son (also Robert 1801-1885) rebuilt Horsey Hall in 1845, soon after his father’s death, on the site of an earlier property but the family’s connection with Horsey ended upon Robert’s death in 1885.

So, the connection between the Sutfields and Risings is tenuous and yet two sons were named Thomas Sutfield Rising, one born in 1774 and another in 1825, three and four generations after the marriage of Elizabeth and Peter. Thomas b1774 was the son of Robert Rising & Ann, nee Manship. Thomas b1825 was the son of William Rising & Elizabeth, nee Howes.

The earliest map showing the existence of potential buildings on the site is the one that accompanies the 1812 Martham Inclosure Award shown on the right.  Inclosure Awards are legal documents recording the ownership and distribution of land. They set out to show ownership of land by individuals, churches, schools and charities, as well as roads, rights of way, drainage and land boundaries. They were not particularly drawn up to identify properties but the accompanying map does seem to show buildings of some sort, perhaps barns. Unfortunately, the plot is not numbered but the 1807 Act that gave rise to the whole process required landowners to make claims which were then considered by Commissioners. The Rising family made several claims and Thomas S Rising claimed ownership of 14 acres which included two inclosures he owned in 1807. His claim did not say there was a house on the site so perhaps this is a pointer to the fact that Sutfield House as we know it today had not been built in 1807. The plot covering the land where Sutfield House is today can be seen on the map outlined in pink. Two buildings are shown but these do not seem to be the same size or have the same footprint as the existing Sutfield House, they may be its predecessor. We will see further on that the earliest known occupier of the house was Thomas Sutfield Rising who was born 1774.

Thomas Sutfield Rising was listed in this voters list as a freehold owner and occupier resident at Martham. It does not give his address but there is no reason to believe it was anywhere other than at Sutfield House. Could this indicate that the house was built between 1807 and 1834?

The 1841 census lists White Street, as it was known at the time, as Highgate Street. Thomas Sutfield Rising (b1774) lived at what would have been Sutfield House (although it is not named as such). The census says he was a farmer.  He had a live-in housekeeper, called Mary Thain, plus two female and two male servants.  So, at this stage he had been associated with the land for over 34 years since the time of the Inclosure Award.

The next event we can look at is the 1842 Tithe Award and its accompanying map shown on the left.  This was drawn because the Tithe Commutation Act of 1836 required that payments of tithes in the form of farm produce should be replaced by money payments. Tithe was a tax, which was paid to the local church. Tithe maps generally show the boundaries of woods, fields, roads, waterways and buildings. This copy of the Norfolk map shows White Street towards the Village Green end and on the left Sutfield House as plot Nos. 343 & 343a being house, garden, land and pasture. The schedule that accompanies the map lists the plots as being owned and occupied by Thomas S Rising. Plot 343 was listed as consisting of one acre, two rods and 10 perches in area and his annual contribution to the Vicar and Church required him to pay 5s  41/2d per annum (about 27p in today’s money).

Thomas Sutfield Rising was listed in this directory as a ‘gentleman’ resident of Martham and the Chief Constable. It does not give his address but it is almost certainly at Sutfield House.

Again, Thomas was listed in this directory as the Chief Constable and again it does not give his address but was probably still Sutfield House.

The census return for 1851 does not actually name Sutfield House but it is obvious from the order that this is where Thomas was living. Mary Thain was still there as his housekeeper and he was listed as being a farmer of 50 acres employing 3 labourers. He also had three servants living in.
By the time Thomas died in 1855 he had no children and his only remaining brother was George Rising (b1779) of Caister so either George or his son Benjamin inherited the house. George was already established as a farmer at Caister and so it seems that his son Benjamin, who married Harriet Gillett in 1860, moved into Sutfield House.

Again, the census return does not actually name Sutfield House but working on the walking order of the census and surrounding properties it is clear that the nephew of Thomas called Benjamin William Rising & his wife Harriet, nee Gillett had moved in.   Benjamin was raised in Caister and was the son of George Rising as shown above. In 1868 William Gillett (1813-1883), the brother of Harriet, was also living at Sutfield House according to the Harrolds Business Directory of that year. He was another Yeoman farmer and in 1861 farmed at West End Cottage (now known as Grange Farm, Cess).

The census returns for these years actually name the house and show that Benjamin and his wife raised their family there throughout this time. We get some idea of the status of the household in 1891 when Benjamin had a live-in valet called Jacob Allison. I have not found any other record for a Martham resident who has his own valet although Benjamin was 69 by this time and may not have been in the best of health.

Benjamin died in 1897 but his widow, Harriet, was still living at Sutfield House throughout 1901 and 1911. In 1911 she was 83 and usefully filled in the census form that she had 5 children who were all alive before crossing the entry out because it was not applicable at the time.  Her spinster sister Ann was also living with her as well as a nephew and servant. The 1911 return tells us that the house had 9 rooms excluding the hall, lobby, stairs, landing and any bathroom(s) or warehouse but should have included the kitchen.

The Ordnance Survey map below is from 1906 and clearly shows the Sutfield House drive, entrance and stables on the north side of the house.

1920
The electoral register of 1920 has Benjamin & Ann Fathers as the occupiers of Sutfield House. He was the Head Teacher at the first Board School from 3rd January 1902 to 30th September 1921.

There is evidence of another change in ownership by 1925 when on 9th August that year an article appeared in the Independent & The Journal newspaper about a fete held at the house in aid of the Baptist Church renovation fund. The owners allowing the fete to take place were Mr & Mrs Hewitt. A copy of the rather long article is shown below with a transcription of the first part of it.

After singing a hymn the Rev Evan Williams offered pray and the Rev J Wooding (Pastor) extended a very cordial welcome to all present and then called upon the President of the Norfolk Baptist Association (Mr. Copeman) to declare the fete open.

In well chosen words Mr. Copeman said that he brought to the church at Martham the good wishes of the Association and spoke hopefully of the work carried out  there. It gave him great pleasure to associate himself with the effort of that day and declared the fete open.

There followed a long list of contributors and participants to the fete stalls plus afternoon and evening entertainment.

Relatives of Mr & Mrs Hewitt tell me that the couple were still living there up to 1933 and were market gardeners. Jimmy Hewitt also grew soft fruit including strawberries and the photograph on the left shows one of the strawberry crates he used for sending them to market using the local railway station.

There is an indication that the house had changed hands by 1937 when Kelly’s Directory for that year listed George Arthur Bailey as living there. He was the market gardener and nursery man who had just about all of what is now the Bell Meadow estate covered in greenhouses that were just outside the back door of Sutfield House.

In 1939 a Register of population was compiled in preparation for the impending second world war and that listed George Bailey and his family living at the house. George was married to Lilian Dorothy, nee Howes which is a surname we have already seen as being previously connect to the Risings so it may be that we have come full circle to where we started.

The two aerial photos below are modern ones of Sutfield House amongst the trees with the Village Hall in the foreground, taken in 2015.

Below is a gallery of the appendices. Hover over any image to see its description. Click on any image to zoom in and then scroll through as many as you wish. 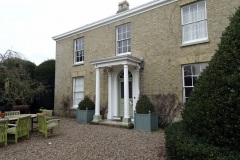 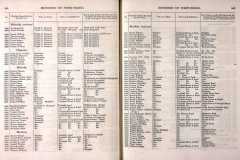 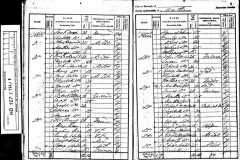 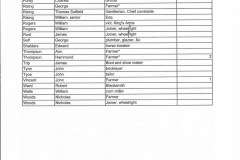 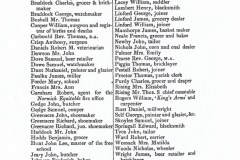 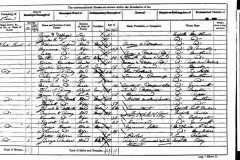 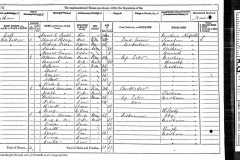 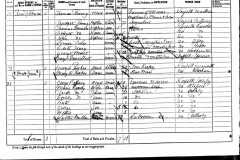 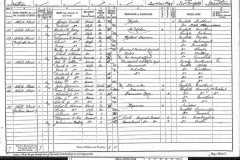 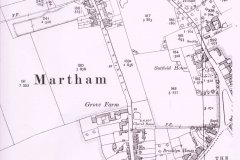 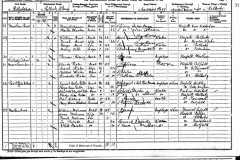 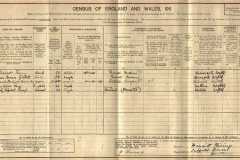 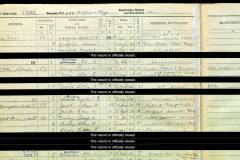