There is a significant difference between post office buildings and the historic  delivery of postal services in Martham. Although nationally postal services date back to the 17th century the service really only took off for the public after the introduction of the penny post in 1837 which became established just under three years later with the well-known penny black. In turn this led to the introduction of Post Office pillar boxes in 1852.

The fact that Martham had Post Office services is recorded in business directories from 1845 onwards but there are no similar indications that the services were provided from a named Post Office building until about 1911.

So, staying with the services element in Martham the 1845 White’s Directory tells us that the following service was provided “At George Linford’s letters daily to Hemsby, Winterton etc.” It appears that you took your letters to his premises and from there they were taken to Hemsby and/or Winterton by carrier. I don’t know where his premises were because it is not made clear but there was a George Linford living at Black Street in 1841 listed as being a grocer and draper. We will come to see that postal services were provided by shopkeepers as part of their work in those early days and there was no specific Post Office building until decades later.  There is no entry in the 1841 census naming a Post Office as such.

In 1846, John Lee Hunt was appointed as postmaster at Martham and the Post Office Directory of that year says “John Lee Hunt, receiving house. Letters arrive from Great Yarmouth every morning (excluding Sunday) at 10.45am and are despatched 15 minutes before 3pm in the afternoon.”

Again, John was not a full-time postmaster. In fact, he had always been a school master and he lived with his wife Frances at the Old School House at the Free School (which is now part of Whittaker’s Carpets) throughout his employment as the schoolmaster until he died in 1880.  Several Directories describe the postal services he provided as follows:

Throughout this period John, his wife and their six children lived at the Old School House and he was always recorded as being the schoolmaster when their children were baptised and in every census return for 1851, 1861 and 1871. In 1871 there is a small indication that the service was growing as their son George (aged 13) was listed as being a telegraphist who is a person who operates a telegraph key to send and receive Morse code to communicate by land lines or radio.

John died in May 1880 and is buried at St Mary’s but the year after this his widow Frances, was still listed in the census as being the postmistress and for the first time the address also said, “Road East of the Green (Post Office)”. This indicates that she was still living at the Old School House and not at a dedicated Post Office building. Below is a copy of the 1881 census return. Frances retired to Lowestoft thereafter and died in 1896.

There was a change in the point of service after they were provided by the Hunt’s and Kelly’s Directory of 1883 says that postal services were provided by Mr. Frederick Green at his premises and that “Letters arrive via Great Yarmouth at 7am and are despatched 5.50pm. This is also a Money Order Office, Telegraph Office and Post Office Savings’ Bank.” Frederick Green was  a grocer, draper, druggist and postmaster & agent for the Norwich Union Fire Insurance Co. and lived on the west side of Black Street, so the postal services were still provided from a general store.

Frederick Green had moved away by 1890 but the same service model continued and Kelly’s Directory of 1890 listed William Colman as providing “Post, Money Order and Telegraph Office services with letters arriving at 6.45am and 2.15pm and  despatched at 5.50pm via Yarmouth.”  In the 1891 census William was described as a grocer living with his wife, two sons and interestingly a boarder called Elizabeth Mary Roswell who was described as a telegraphist. More importantly the address for the Colman’s was described as being “The Green, (Post Office)”. Their stay in Martham was short and they left by the following year.

Kelly’s Directories of 1892 and 1896 list Mr. Harbord Hooper as being the postmaster providing similar services of “Post, Money Orders, Telegraph Office, Savings’ Bank and Annuity & Insurance Office with letters arriving from Yarmouth at 6.20am and despatched at 5.50pm. The 1901 census lists the Hooper’s as living at The Green, Martham with Harbord being a grocer and draper. Once again there is no mention of the Post Office as a separate address in the 1901 census.

Below is a copy of the Ordnance Survey map for this period (c1884) which shows a Post Office as being very near Clowes Stores, so it is possible that both the Colman’s and Hooper’s worked out of this building as grocers and drapers with postal services as part of their business.

The British Postal Service Appointments Book shows that in 1902 Eldred Edgar Brooks was appointed as a rural postman so demand for the postal service was growing. Eldred was born in Martham and was married to Laura, nee Harman. They lived at Damgate in 1901 and Black Street in 1911.

Kelly’s Directory of 1904 lists Benjamin George Harwood as being the sub-postmaster. The services were “Post, Money Order and Telegraph Office. Express delivery. Savings’ Bank and Annuity & Insurance Office. Letters arrive from Yarmouth at 6.40am & 2.30pm; despatched at 10.35am & 12.50pm & 5.40pm; Sunday 5.40pm.” Benjamin was the manager of Clowes grocers and drapers store at Timber Hill which supports the Post Office being there as shown on the above map. Benjamin remained as the manager for many years but changes were in the wind for the Post Office delivery service.

By 1911 a big change had taken place and the service was actually provided out of a building named as the Post Office and it was next door to the former Star Inn at Repps Road. The above photo shows the Post Office run by Richard and Edith Goodrich. Note the Star Inn sign and that the postcard was part of the “Goodrich Series” so Richard must have produced this to promote his business there.

The 1911 census tells us that Richard & Edith, nee Edwards, plus their two children lived there. Richard was the Sub Postmaster and Edith was his Assistant. Kelly’s Directory of 1912 says that the services provided were much as we have seen before, that is  “Post, Money Order and Telegraph Office. Letters arrive from Great Yarmouth at 6.40am & 2.30pm; despatched at 10.30am & 12.55pm & 5.40pm; Sunday 5.40pm.  The letter services were increasing however and there was a wall letter box in the Church Yard which by 1921 was cleared at 10.15am & 5.30pm weekdays and at 6.15pm on Sundays.

The photograph below is another one from the “Goodrich Series” which includes a postman with his barrow load of letters and a busy forecourt.

One of the postmen that worked out of the Repps Road Post Office was Arthur Ribbands. He was born on 12th December 1899 in Martham as the seventh child of Samuel Charles Ribbands & Susannah, nee Ward. He grew up living with his parents at Black Street and attended the village school from 1903 to 1909. In 1926 Arthur married Edith Helen Simmons the daughter of Elijah Simmons & Edith Ellen Flowerdew. They had three children: Derek born in 1927; Cynthia born in 1931 and Moyra in 1935. By 1928 the Post Office service at the Repps Road premises had moved out but Arthur stayed and ran a hairdressers and barbers from the same premises. This is a photograph of Arthur’s shop in 1929 – note the barber’s pole.

The Post Office moved to the premises that most local people will remember best, at 2 The Green next door to the Methodist Church Manse. The building was not purpose built of course and was over 100 years old when it was steadily converted to become the Post Office. In its original state the property was a rather grand house built before 1842 when it was the home and premises of William Cooper who was a surgeon, and the registrar of births and deaths up to 1850. This is a photograph of their house around that time.

William was married to Amelia, nee Jones and they had two daughters called Emma and Amelia. Their house was the forerunner of what would later become the Post Office. In 1842  William appeared in the Tithe Award list as the owner of the house which was on plot No44. It was listed as being a house and garden of 31 perches.  A copy of the Tithe Award map with plot No44 is shown on the left. By 1851 William had retired and had moved to White Street.

William’s original house was extended at the front in phases. It seems to have had a small extension at first which suited the size of the office having moved from Repps Road. The photographs below show the building at this stage with a close-up on the right.

In 1928 John Edward Youngs was appointed Sub Postmaster and he was later listed in the 1937 and 1939 editions of Kelly’s Directories as also being a newsagent, stationer and agent for Carter’s seeds and Pickfords carriers but the difference now was that the Post Office was prominently labelled and was his main business. John was born in Martham in 1887 and served in the Navy before he married Gertrude Lily Dyball at St Mary’s in 1916. They went on the have at least six children one of which was a daughter called Beryl whose name appears again further on. Below are two photographs of the Post Office showing John Youngs name by which time the whole frontage of the building had been extended forward.

In 1938 John ran an advert – shown below – in the Martham Carnival Programme that included a photograph of the Post Office.

John retired in around 1947 and as mentioned above one of his daughter’s was Beryl (born 1921); she married twice and her second marriage on 2nd April 1947 was to Douglas Fergus Beatty Coupar, held at the Methodist Chapel on Repps Road. 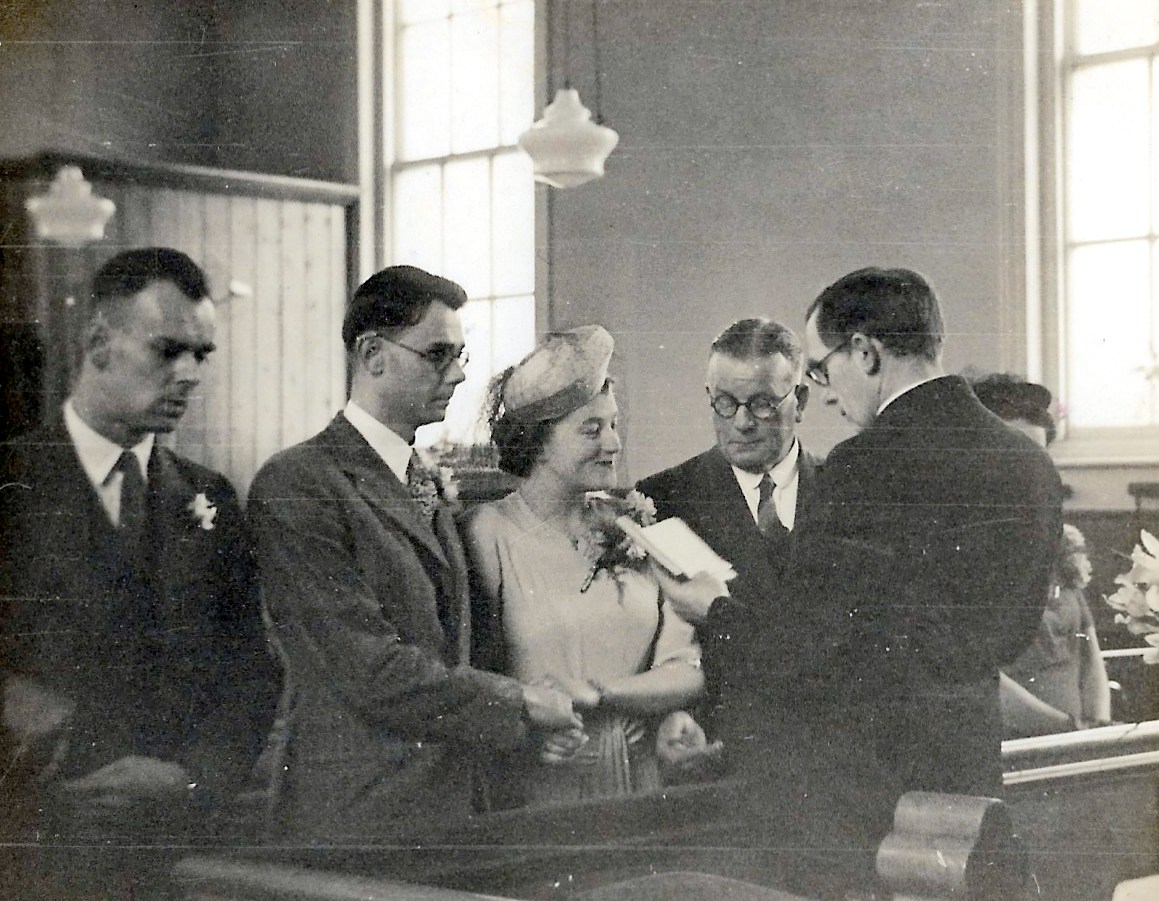 They met during WW2 when they were based at Catterick. They took over the Post Office from her father and ran it until they had to sell due to Douglas’ ill health. Douglas died in 1991 and Beryl in 2004. Below is a photograph of the Post Office showing the Coupar signage.

The Coupars sold the Post Office to Michael & Anne Cheviot in the early 1980’s.

Beverley John Gallant worked for the Coupar’s from 1964 to 1981 but left and joined the  National Post Office after it was sold to the Cheviot’s. Robin Ward also worked at the Martham branch from 1979 to 1987.

Michael Cheviot also purchased several other businesses in the village including the former Frances Shop by the main pond but quickly ceased trading resulting in the whole Post Office building being purchased by David Utting in 1984. In 1986 David leased the shop side to Andy Coates whilst continuing to run the branch Post Office.

David remained as the last Sub Postmaster before the Post Office was transferred to the Co-operative Store on The Green in March 2015. Moving to the Co-op really brought it full circle as the service was once again provided as a secondary operation within a grocery store. Below is a report dated 24th April 2015 published by the Mercury about the Post Office moving to its new home.