This ancient road has always been the main route into the village from the west and was at one time referred to as one of the five King’s Highways entering Martham Green (the others being what we now know as Rollesby Road, Black Street, White Street and Hemsby Road).

There was a smock mill built in Repps Road in 1850 which you can read more about by clicking HERE.

The main run of older properties on Repps Road are on the north side, numbers 26 to 68 (evens). Below are photographs of them all. Numbers 26 to 64 were built before the railway in 1877 because they exist on the drawings of plans for the railway but if you know more precise dates for when any of them were built, or have any other information about them, please contact me.

Clamps Close, 26 Repps Road. The former Post Office and hairdressers run by Arthur Ribbands. When Arthur ran his business there it was called Sheppey House.

The Wilderness, 30 Repps Road. The house was a former vets. You can read its full history by clicking on its name.

34 to 38 Repps Road.
In 1939 this was three sperate cottages.
No34 was occupied by George Thomas Harriss who was a retired roadman born in 1872.
No36 was occupied by Alfred & Edith Rouse.
No38 was occupied by Benjamin & Emma Self and their daughter Edith.

42 Repps Road.
The house was called Oaklands at some point in the past.

46 Repps Road.
In 1939 the house seems to have been shared by four people; Edgar Richardson, James & Mary Chatten & Henry Newton.

52 Repps Road is missing nowadays but was the former area that Mill House Stores (Pitcher’s Store) stood on the road in front of Windmill House.

Windmill House, 54 Repps Road.
This house derives from the time of the original smock mill which was at the back of this site.

Mill House, 56 Repps Road.
Modern house built at the front of the plot that had Repps Road smock mill on it in the past. In 1939 the former house there was occupied by John & Miriam Dyball. John was a retired railway platelayer.

Columbary, 58 Repps Road.
From at least 1911 to 1929, and perhaps longer, William Edward Cooke lived here.
At some point before 1937 William Bracey, the blackcurrant farmer, bought the house and it was put up for sale by his Executors in 1937 but did not attract any bids. In 1939 it was occupied by William & Grace Rigg. He was a chartered accountant.

Morse House, 60 Repps Road.
The Bracey, farming family, owned the house in the early 20th century and in 1911 Henrietta Bracey, nee Broom, and two of her children were living there. In 1937 the Executors of William Bracey put it up for auction and it was purchased by Mr H G Thirtle of Hemsby for £490.

Fencote, 62 Repps Road. On the right of this photograph.
In 1939 Arthur & Ethel Alcock were living here. Arthur was a master painter and decorator.

The Poplars, 64 Repps Road. Shown on the left of this photograph.
In 1937 the Executors of William Bracey put the house up for auction and it was purchased by Mr Thirtle of Hemsby for £490.
In 1939 the widow of Anthony William Crisp, Charlotte, nee Herring was living here with her companion Alice Norfolk.

Former Police House, 66 Repps Road.
In 1939 Frank & Hannah Copeman were living here. He was a policeman.

On the south side of Repps Road there are three detached bungalows Nos. 3, 5 and 7 that were built in the 1950’s by the owners of the Martham Boat Building Company. During this period their business was in its heyday. Two of its directors lived there; the Managing Director Jimmy Brown lived at No5 whilst the Chief Designer, Maurice Davey, lived at No7.

For photographs of Repps Road click a thumbnail for a close-up and scroll through all the images from there. 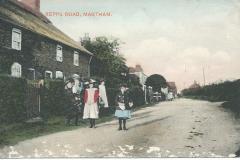 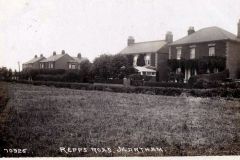 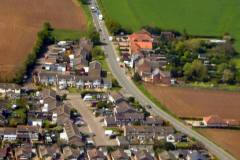 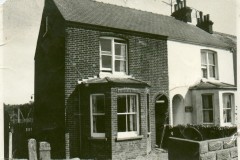 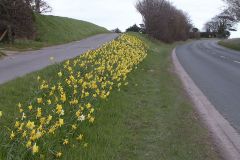 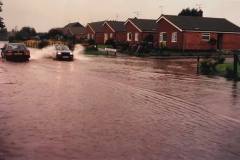 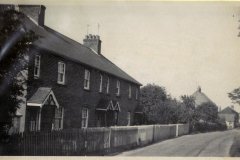