Manor Farm is an elegant yeoman’s house that stands to the east side of Back Lane across the road from Bracey’s pond. For many years it was associated with the Bracey farming family who were famous for blackcurrant production.

There is a possibility that the property existed at the beginning of the 19th century. An outline of a building is shown in approximately the same position as the present house in the 1812 Inclosure Award – see the map on the left below. This cannot be certain but the land was owned at the time by John Pollard (1802-1882) and this is significant because the 1842 Tithe Award map – see right below – also shows the building much more clearly as plot No672, described as a house and premises which was still owned by John Pollard and occupied by Thomas Manship a member of the Manship farming family dynasty.

The architectural style of the present house does not indicate a very early 19th century building; it is Georgian in style so it is more likely that the 1812 property was replaced with the present one before 1842. If this is the case it was almost certainly built by John Pollard.  His 1842 land holdings in Martham are shown in this list taken from the 1842 Tithe Award.

The house then becomes much more difficult to identify as it is not named in any census until 1881.  The name Manor House (or Manor Farm) is somewhat confusing as the property itself has never had anything to do with the actual manors of Martham. Martham had two historic manors: principally at The Hall, Hall Road and a small second manor at Moregrove to the north of the village.

Looking at John Pollard himself helps a little but not until 1871 when it is highly likely he lived at Manor Farm.  It was not named as such but the walking order of the census certainly places John Pollard as being very much in that area. The  address given says he was at “The Back Road” and was a “farmer of 220 acres of land employing seven men and boys.” He was born in Martham but his earlier homes were elsewhere. In 1812 he lived nearby at Carriers Farm. In 1832 he was listed in the Martham Register of Electors, although he did not necessarily have to live in Martham as he may have qualified at the time by just being a landowner. In 1841 he lived at Great Ormesby. In 1851 he lived at East Somerton. In 1861 he did live at Martham but on the north side of The Green in an un-named property next door to Brooklyn House.  In 1881 he was lodging at Norwich House and he died in 1882 and is buried at St Mary’s Church.

1851, 1861 and 1871. The property was not named in any of these census years which is not that unusual at that time unless they were very substantial indeed. It was also not named in any business directories for this period. Despite being a large residence that could only have been afforded by a wealthy farmer or yeoman there is no clear indication of who lived there. There are several potential candidates who had the means to afford to build it and all of them lived in this part of the village during this period.

In 1881 the house was finally named as “Manor House, Road east of Green” for the first time. John Pollard was still alive but had let the house to James Cooper Faulke, Snr (1820-1883) who was the occupier. The census said he was a “farmer of 200 acres employing 8 men and one boy”. The property had never been called Manor House in any records before this time so it seems it was James Faulke who named it. Sadly, James died two years after the census was taken.

John Pollard died on 9th March 1882 at Martham. John had out-lived his wife and they had no children so his nephew Richard Knights (1821-1894) inherited everything. The census of 1891 again does not mention the property by name but looking closely at the walking order of the census Richard Knights appears right there. He lived there with his second wife, Elizabeth. He called the house Hughender or Hughenden Lodge, ‘Road East of The Green. The writing is not clear. This house name does not appear in any other Martham records and is not repeated again anywhere that I can find. Again, Richard was a successful farmer and his time there ended with his death in 1894. His widow, Elizabeth, moved to Repps Road and the property changed hands once again.

In 1908 William Bracey Snr. acquired the Martham Estate including Martham Hall and with it the manorial rights of the manor. William was born in Great Yarmouth and was a very successful builder who had diversified into farming. He first moved to Martham from Great Yarmouth between 1881 and 1890 but even after buying the Martham Estate he was again counted in the census in 1901 as living at Cess Road with his son William (Jnr.) living next door. Kelly’s directory tells us that William Bracey Snr. had moved to the Manor House and his son lived at Ealing House in Repps Road. It was William Bracey (Jnr) that had started and developed the blackcurrant production side of the business and he was recorded as living at the Manor House in 1911.

William Bracey senior died in 1922 and his Trustees managed the business, headed by his son, for many years thereafter. It was not until 1937 that parts of the business were put up for sale including Manor Farm. William Bracey Jnr. purchased Manor House/Farm from the Estate for £3,900 and continued to live there until his death in 1949. Below are copies of three pages from the auction catalogue and a copy of an article in The Journal of 24th July 1937 that reported on the details of the outcome of the auction held on 17th July 1937.

William’s widow Clara continued to live in the house until her death in 1956. The business continued and in 1971 Raymond Crisp, the grandson of William Bracey (Jnr.), took over management of the firm. In 1973 the company was the first in England to pioneer a fully mechanised method of fruit processing, an innovation which reportedly cost about £25,000. Profits however plummeted dramatically during the following decade due to competition from cheaper imports and in the early 1990s the merchant side of the company ceased. Raymond Crisp was living in the house in the late 1980’s when I remember visiting him there. The blackcurrant business was eventually sold in 2002 and most of the former barns have since been converted into private homes.

The house changed hands in 2003 and was not put on the market again until 2020 when the Estate Agents advertised it like this:

Click on any photo to enlarge it and you can then scroll through them all from there. 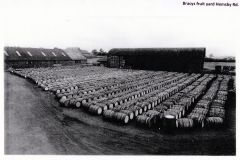 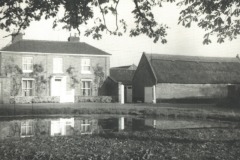 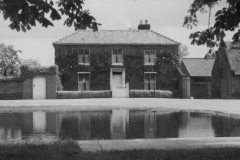 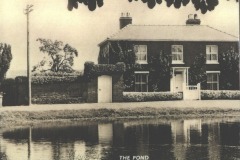 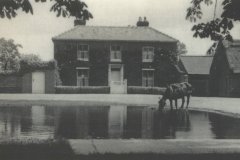